Greifswald’s university was founded in 1456 mainly on the initiative of the Mayor Heinrich Rubenow (around 1400-1462). Academic teaching took place in town houses for 135 years. A central building could only be acquired in 1596. Besides auditoriums and the library there were also apartments for professors and a detention cell in this magnificent Renaissance building. The dilapidated building no longer met the standards in the 18th century and was torn down. The new main university building was built on the foundation walls from 1747 to 1750 under the Swedish reign based on plans by the Mathematics professor and architect Andreas Mayer (1716-1782). The assembly hall, one of the most beautiful Baroque ballrooms in the country today, housed the university library until 1883. The Konzilsaal is decorated with a collection of professor portraits by the painter Wilhelm Titel (1784-1862) from the years 1835-1856. The plastered brick building was extensively renovated from 2003 to 2006 on the occasion of the university’s 550th anniversary. It was given a grey coat of paint in the process. The university rector’s office is based in the main university building.

The Rubenow monument in front of the main university building is the highest free-standing zinc cast monument in Germany today at 12.10 metres. Friedrich August Stüler created it on the occasion of the University of Greifswald’s 400th anniversary. The monument in honour of Heinrich Rubenow(around 1400-1462), Mayor and founder of the University of Greifswald, was consecrated on 17 October 1856 in the presence of King Frederick William IV of Prussia. The statue cast in zinc portrays representatives of the faculties and important people who funded the university. Duke Wartislaw IX of Pomerania-Wolgast (around 1400–1457), Duke Bogislaw XIV of Pomerania (1580–1637), King of Sweden Frederick I (1710–1771), Frederick William III of Prussia (1744–1797). Representatives of the university’s founding faculties: Johannes Bugenhagen (1485–1558, Theology Faculty), David Mevius (1609–1670, Law Faculty), August Friedrich Berndt (1793–1854, Medical Faculty), Ernst Moritz Arndt (1769–1860, Philosophical Faculty). Environmental influences afflicted the monument over 150 years before it was extensively renovated with donated funds for the university’s 550th anniversary in 2006.

The site was described as a “deserted square” in the middle of the 15th century. The first thoughts on designing the square and giving the newly built main university building an attractive setting came about around 1800. From this point in time, the city quarter between the Jacobi church and cathedral was developed into one of the most important inner city squares. Vendors and travelling folk used it for decades, as did the military later on for exercising. Finally, there was the idea of redesigning the grounds based on plans by the landscape architect Peter Joseph Lenné for the university’s 400th anniversary. The green space was consecrated as Rubenowplatz in 1857. The Rubenow monument in memory of the university’s founder had been built a year before. A flat fountain basin was sunk into the ground at his feet during the redesign in 2006. Text passages from the university’s foundation certificate are engraved into the dark grey basalt strip. The beautifully designed square is one of the most popular meeting places in the heart of the city.

Engraving in the basalt strip on Rubenowplatz: “It is a source and origin of the sciences whose wealth can be drawn upon by anyone aspiring to be introduced to the curriculum of the sciences through instruction.” From the foundation certificate for the university in Greifswald, issued by Pope Calixtus II, Rome in 1456 on 29 May.

The auditorium building was built from 1884 to 1886 by the Greifswald university master builder Paul Emil Hofmann. It is part of the ensemble of brick university buildings that was built in the 19th century around the late Baroque main university building. The number of students had increased fivefold from 1850 to 1886! 1,000 students needed room. There was space for 400 students in the Audimax, the largest auditorium building in the city at that time. In 2008 the buildings and auditoriums were extensively renovated with funds from the Alfried Krupp von Bohlen and Halbach Foundation.

Karzer - Detention Cell in the Audimax

Students who ran riot, messed around with lewd women, duelled, were picked up drunk and incapable or even bunked lectures were put in the detention cell for days or just a few hours in the period between 1885 and 1904. The punished immortalised themselves during this time when they were actually supposed to be showing regret and doing penance with paintings and sayings. This colourful graffiti on the walls of both detention cells still causes amusement today: “Bad boys, good girls? Why students used to be locked up at the university” is the name of a university tour during which you can explore the detention cell. The detention cell is only accessible on a tour!

The existence of a Greifswald university library has been confirmed by documents since 1604. The collections were housed in numerous teaching buildings, later also in today’s assembly hall in the main university building, among other places. The library building was built in Rubenowstraße based on plans by the architects Martin Gropius (1824-1880) and Heino Schmieden (1835-1913) from 1880 to 1882. Today, several special collections are kept in the “Old Library”, including the “Pomeranica”, which includes 30,000 volumes with content referring to Pomerania, the “Old Book” collection with works from the beginnings of letterpress printing to 1850 and the specialist history library. Numerous works can be looked at in the reading room with 35 seats.

The physicist and mathematician Andreas Mayer (1716-1782), the architect of the Greifswald main university building, was the first scientist to teach astronomy at the university back then. The first observatory for regular exploration of the night sky was only built in the Fangenturm at the city harbour in 1775 on the suggestion of his successor Lambert H. Röhl (1733-1790). It operated here until 1825. An observatory was only set up here and equipped with modern equipment from Carl Zeiss Jena in 1891 once the new Physics Institute had been built on the university campus. The facility was used for research and teaching from 1924 until the end of the Second World War. An association founded in 1992 made the historical observatory accessible to the public. The rotatable cupola with a diameter of 6 metres and roughly 35 metres high was renovated and the valuable telescope was reconstructed. The equipment is supplemented by modern devices, such as a radio telescope, developed at the Max-Planck-Institut Garching.

The University of Greifswald´s Botanical Garden and Arboretum

The Botanical Garden was founded by Samuel Gustav Wilcke (1736-1790) in 1763 and created between the former college building, today’s main university building and the city wall. The garden had to be moved to Grimmer Straße in 1886 though due to lack of space. Prof. Julius Münter (1815–1885) was responsible for the planning. Greenhouses and an outdoor area were developed in themed quarters over an area of roughly two hectares. The historical greenhouses from the 19th century cannot be visited. They had to be closed in June 2014 due to their poor structural condition. Renovation would cost 2.5 million euros.The Botanical Garden was extended by the Arboretum in 1934, a respectable collection of trees in Friedrich-Ludwig-Jahn-Straße. The garden and Arboretum are still used for teaching and research today. 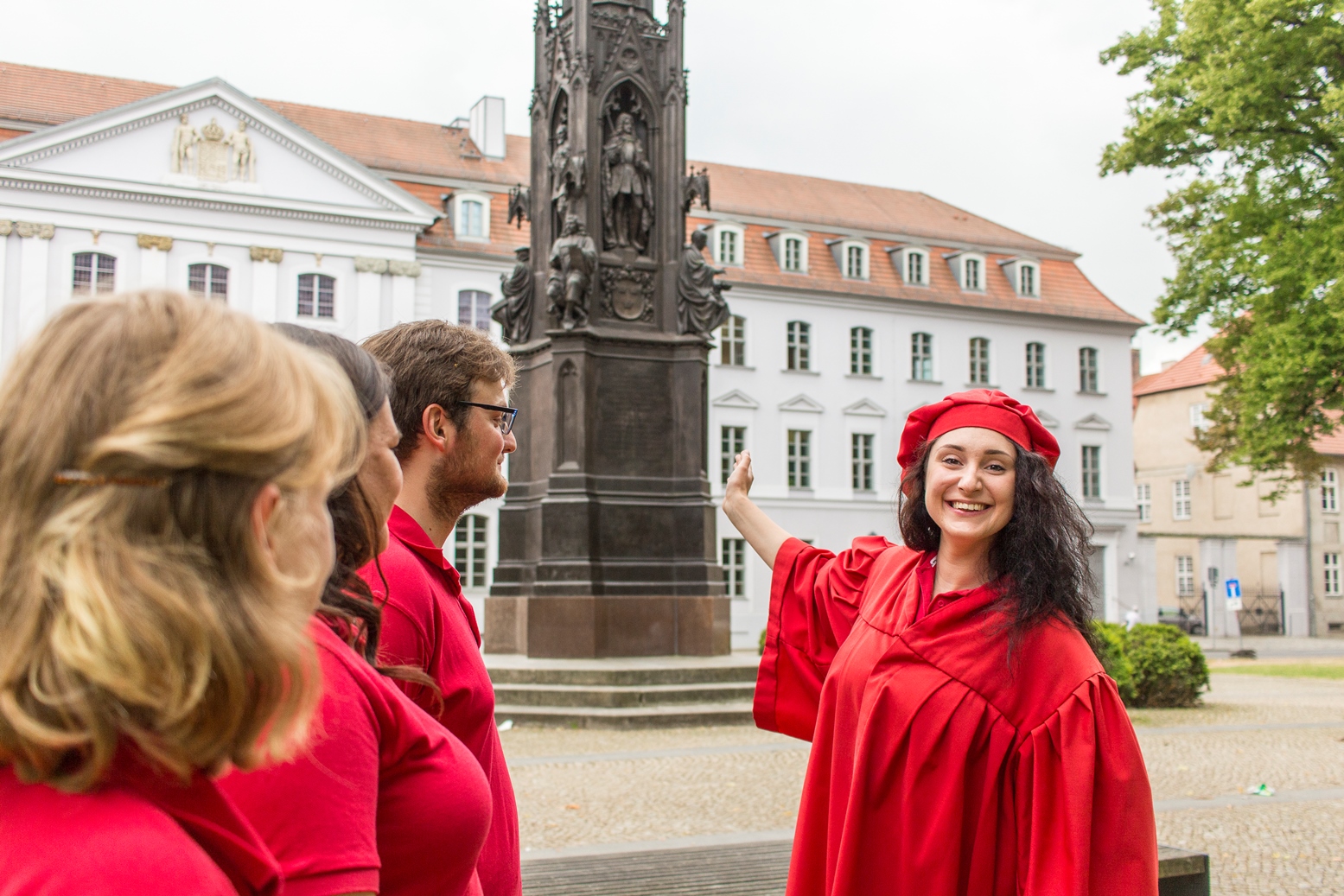